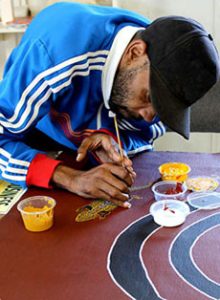 Ashley Pompey is a self-taught artist who expresses love and experiences with animals through his dot art. He went to school and currently works as an artist in Ceduna on the Westcoast of South Australia. He always had the ambition to become an artist and ever since completing his first painting, his practice has developed into intricate and complex works of art in which he portrays his interest in a variety of mammals, marsupials, reptiles and birds. He skillfully captures different textures, intricate patterns and styles for layout. Ashley’s painting is a performance. The manner in which he controls his paint on the tip of his brust, or a stick, and the way his body has to endure the physical intensity of the variety of dot sizes he uses in his painting is impressive to observe. The time and patience Ashley invests in his paintings illustrate his discipline for creating exceptional works of art. As an emerging artist, Ashley won several notable Indigenous art prizes.

During his short career of painting, he was awarded the Country Arts South Australian Young Achievers Award at the Our Mob exhibition in 2016. In the same year Ashley was awarded the People’s Choice Award at the Indigenous Malka Art Prize, and in 2017 Ashley was awarded the Malka Art Prize of South Australia. In 2019 Ashley participated in the Indigenous Curators Programme at the Darwin Art Fair. In the same year Ashley participated as a member of the curatorial team in the Vietnam One In All In project funded by Country Art South Australia. As a Wirangu man, Ashley also serves on the board of directors of Ku Arts.

All Paintings by Ashley Pompey