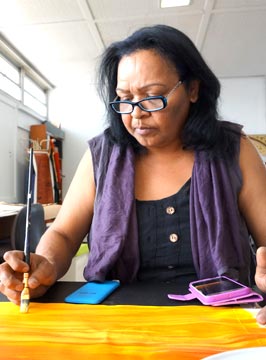 Cassandra Gray was born in Ceduna, South Australia in 1972. Born and raised as part of both the Wirangu and Kokatha language groups, Cassandra lived in Koonibba growing up as a young child with her Grandparents. Attending the local school in Ceduna where she learnt to love and enjoy Art through her art teacher. Later years Cassandra meet her partner and had four children in Berry South Australia. Cassandra always stayed connected with family and visiting them when she could.

Cassandra has been painting for the past thirty six years. Starting out as a hobby painting while she was attending school and excelled from there on.

All Paintings by Cassandra Gray