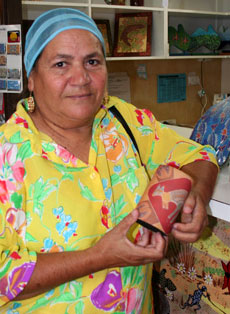 Christine developed a passion for art in her early years while at school, and it has continued. Christine remembers her first painting she ever sold, which was to a young English nurse, while she was the co-ordinator of the Koonibba Women’s Group in 1981. It was a painting of the Aboriginal flag, which she sold for $25. This gave her confidence and she realised that she could make money from her artwork.

Christine’s focus is on contemporary Aboriginal Art and over the years Christine has developed a unique style to her paintings. She has had her work exhibited in Exhibitions across Adelaide and Ceduna and has entered many art prizes.

All Paintings by Christine Tschuna