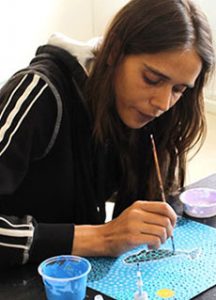 Collette Gray was born in Murat Bay, Ceduna in South Australia. Although Collette enjoyed painting at school from the age of thirteen, she only became a professional artist in 2012 when she won a position as Arts Worker at the Ceduna Aboriginal Arts and Culture Centre. Both Collette's mother Janine Gray, and mother-in-law Verna Lawrie, are accomplished artists from Koonibba. She often observed them painting, which inspired her to 'get in there and start painting'.

Collette uses various painting techniques and approaches in her practices such as dot painting and applying contemporary techniques with various painting tools. Her work is contemporary. When she has paint and canvas in front of her she receives inspiration through her memories and her feelings, or 'what my heart tells me' she explains. One of the recurring themes in Collette's work is the tree of life and she hopes too that she will be able to hand down this knowledge to one of her daughters or another family member.

Other sources of inspiration for the artist include themes such as the different varieties of bush tucker that she is familiar with, stemming from the Country she grew up in and admires. Her environment influences her work in many ways. Earth colours represent the land and gives her connection to the land that t she lives on and that gives her new opportunities to explore and experience her culture, languages and talents. She enjoys observing the whirly winds, whales close to the shoreline, vastness of the Nullarbor and the wanna (ocean).

All Paintings by Collette Gray