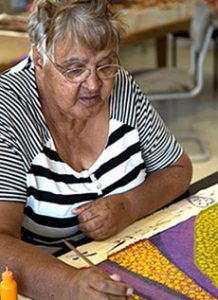 Denise Scott was born at Koonibba Hospital. Her father worked on the roads along the Eyre Highway. Her family moved to places on the Far West Coast such as Bookabie, Coorabie and Colona Station. She still enjoys the connection to the country she grew up in. Denise still spends a lot of her holidays in these areas. Denise has two sisters and four brothers they all still live in Ceduna, Bookabie and Yalata. She enjoys her time in the bush, fishing and camping where they still maintain the traditional way of cooking fish and Wardu (Wombat). Denise has recently learnt new techniques of painting which has improved her quality of artwork. She enjoys painting at the Art Centre.

All Artworks by Denise Scott