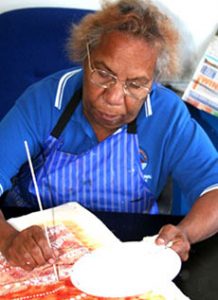 Elizabeth Ryan was born in Palm Island, Queensland. She then Came to live in Ceduna in 1972 with her partner Mitch Dunnet. They have 3 children and live on a homeland called Koongawa Dundey, which is about 10km from Ceduna. She visits Palm Island once a year. When she was younger she used to make coconut oil and eat the kernel inside the Coconuts that had started to sprout. These were delicious to eat. She also misses eating the fresh and plentiful mangoes that grew around the island.

All Paintings by Elizabeth Ryan