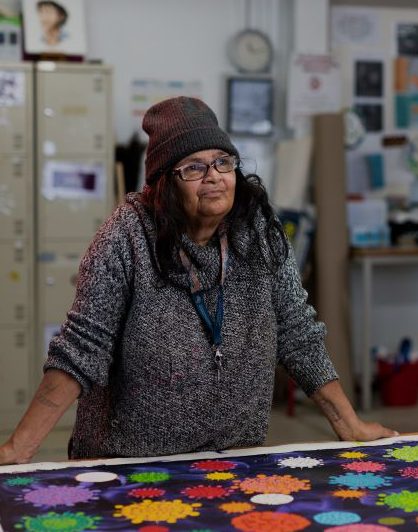 Glenda Richards lived her childhood at Koonibba until she was displaced to Warramboo. She attended her junior school years here, and senior ones at Wudinna. She left Warramboo to come to Ceduna for personal reasons. She has since learned that she belongs a Kokatha woman. She studied at TAFE for about four years, got a job at Weena Mooga Womens Group centre and stayed there for about six months. She then came to the Ceduna Aboriginal Arts and Culture Centre. She has also been on the board of management for TWT (governing body of the Arts and Culture Centre), community representative, and steering Committee for the Ceduna Aboriginal Arts and Culture Centre.

Her painting "Seven Sisters" was sold at McLaren Vale and went to New Zealand. She was very proud of this.

All Paintings by Glenda Richards