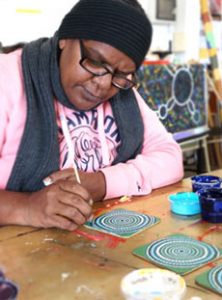 Jaime Newchurch was born in Maitland on the York Peninsula and moved to Ceduna when she was young where she attended the Ceduna Area School. Her grandmother is from Konia. After leaving school she gained employment through the local childcare in Ceduna and she also worked at the Transitional Accommodation Centre in Ceduna. After a visit to the Ceduna Aboriginal Arts and Culture Centre Jaime soon learned that her skills in drawing and experimenting with art materials quickly developed into painting with acrylic on canvas. A new love was discovered.

Today Jaime has the ability to apply herself widely in the arts filed. She experiments and works in various media such as painting on canvas, pottery making, yarn crafts and building wire structures. Jaime’s first love, however, remains to be dot painting and in her paintings and their stories she often refers to themes such as water, the ocean and meeting places.

Community cultural arts development is an important aspect to Jaime’s work as she often is involved in community projects that are linked to schools and family centres in Ceduna.

Since 2016 Jaime manages the framing room at the Ceduna Aboriginal Arts and Culture Centre. She developed and mastered yet another creative skill that allows her to sustain herself and her family in Ceduna. In 2016 Jaime will engage in an intensive ceramics training workshop at TAACC with an international artist who will show her the ropes in kiln and pit firing.

All Paintings by Jaime Newchurch