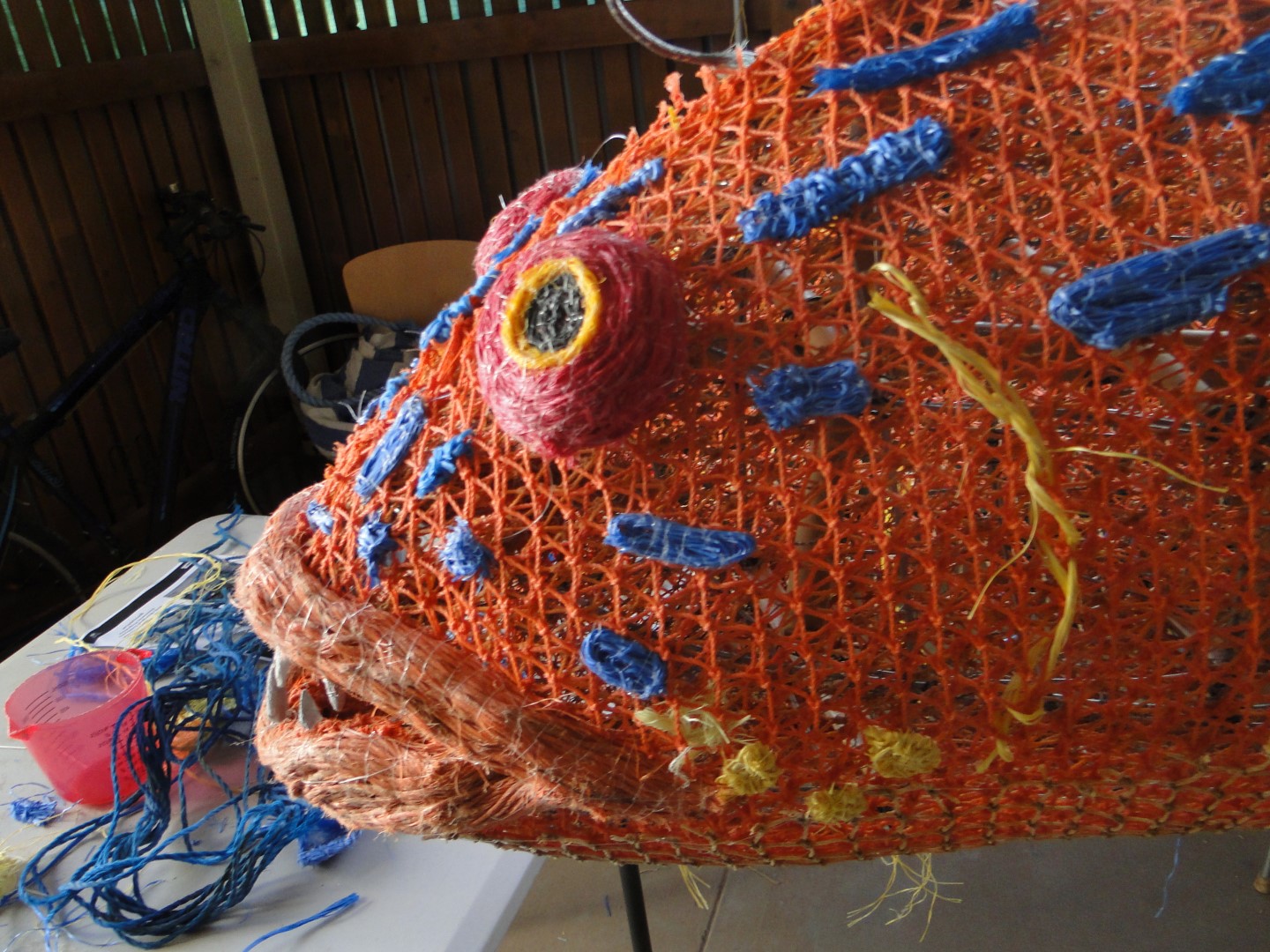 Arts Ceduna will launch the latest in a series of ‘Marine Debris’ sculptural work at the centre this week.

Artists at Ceduna and Yalata jointly worked on two sculptures made from discarded marine debris such as tuna nets and rope, creating a harlequin fish and orca.

The sculptures were made during a two-week period at Yalata, with the finishing touches applied at Arts Ceduna by artists Pam Diment and Sherrie Jones.

The workshop – funded by Alinytjara Wilurara Natural Resources Management (AWNRM), the Department of Environment and Water (DEW) and Arts Ceduna – saw Ms Diment and Ms Jones joined by Bruce MacPherson from DEW, members of the AWNRM board and the Yalata community to create the sculptures.

“We had about 20 people at Yalata who were involved in the project, with Sue Ryan the lead facilitator and Sherrie and myself acting as mentors who could upskill for future projects,” Ms Diment said.

“This project adds to the theme which continues to grow, of looking after our environment.”

Members of the Yalata community sourced discarded materials from local beaches, while Ms Diment also obtained objects from a visit to Port Lincoln.

The two sculptures add to the marine theme established in recent years by the Ghost Net Art Project group.

In 2014 a four-metre long southern right whale called Jidirah was built in Ceduna with the help of visiting Yalata women and was exhibited in Australia and Europe.

Yalata’s Polly Charra suggested creating a harlequin fish – which is found in South Australian waters – while with material remaining it was decided to also build the three-metre orca.

After the bulk of the two sculptures were finished during the time at Yalata they were transported to Ceduna to complete.

Serena Gunter from Arts Ceduna said the projects generated a range of skills for artists involved.

“There are a number of skills involved such as weaving, sawing, construction of the bamboo frame and chicken wire frame and cutting ropes,” she said.

“There are also consultations with artists about objects to make and collaborating together while being guided by facilitators on the project.”

Ms Gunter said the launch would take place on Thursday at 12pm, getting those who worked on the project together to celebrate their work, while members of the community were also invited to come along.

Ms Gunter said they were also looking for a buyer – with interest already coming from the Swiss purchaser of the crab.

“The sales of the crab and whale allowed the centre to continue on, to work on projects, and we want to do another sculpture next year,” Ms Gunter said.

Ms Diment said it would not only put money into the centre and allow for future projects, but also help to build artists’ skills.

There are already other projects in mind, with a mulloway, leafy seadragon, dolphin or mallee fowl bird next on the agenda.