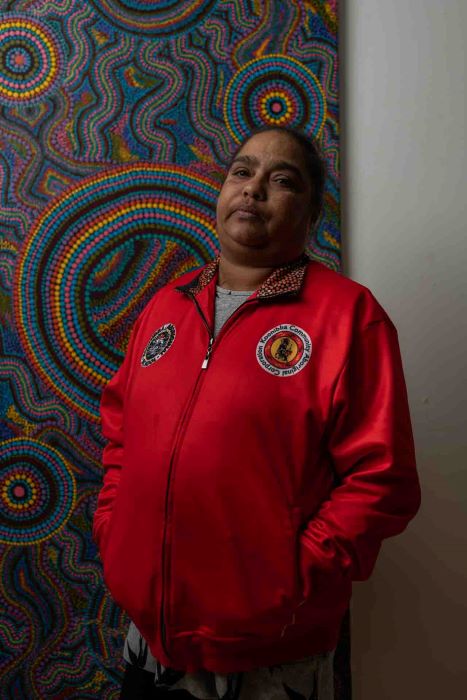 Sherrie Jones was born in Perth, Western Australia, in 1978. Born and raised as part of both the Wirangu and Mirning language groups, Sherrie lived in Carnarvon, Western Australia, until she was ten years old. Thereafter she moved with her father to Coober Pedy in South Australia where she did her early years schooling, while finishing high school in Port Lincoln. Sherrie remained connected to Western Australia and the desert where her mother was born.

Sherrie has been painting for the past seventeen years and started hobby painting while she was in Port Lincoln attending high school. She is inspired by her grandfather and also her father, Winston Hubert, who is a renowned artist from the Pilbara currently living in Port Augusta. She uses acrylic on canvas to paint themes related to memories from her childhood and passed down stories from her family.

When she was young Sherrie's father remarried and moved with her to Coober Pedy where she learned about her stepmother's family and Culture who originate from far north Queensland and the Torres Straight Island. With an intense interest in, and respect for different Cultures, Sherrie lives as a proud Aboriginal woman and believes she has much to give to and learn from others.

Experimenting with the use of colour, techniques, themes and perspective remains Sherrie's artistic strength. Her mark making on Canvas includes techniques such as Aboriginal dot painting, playful brush strokes and contour lines. Sherrie's colours are boldly juxtaposed, illustrating her fearless approach to contrasts while accomplishing harmony.

Sherrie's dream is to become internationally renowned fine artist, following in the footsteps of her father who is a landscape artist. Painting is her life, she states, and telling her stories through her paintings adds meaning. In 2014. Sherrie had a kidney transplant that for two years impacted on her artistic practice as she was unable to paint full time, but currently she is painting full time again.

All Paintings by Sherrie Jones