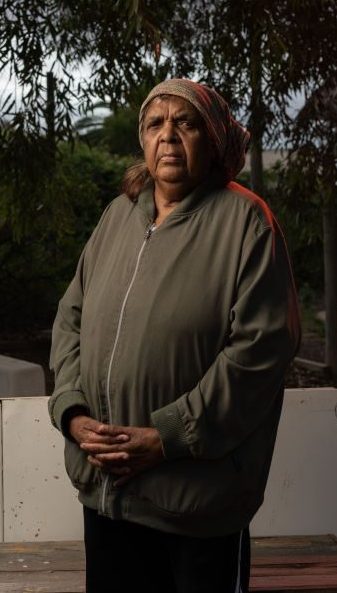 Verna Lawrie was born at Koonibba Aboriginal Mission situated 35 kilometers west of Ceduna. She used to work part time at the Ceduna Aboriginal Arts and Culture Centre where she supported artists in the painting studios. Verna has nearly painted all her life and she grew up surrounded by artistic family members. Her husband was a renowned painter, but also her children and grandchildren are artists. Her grandson Beaver Lennon is an internationally renowned artist from Ceduna.

Verna says being an artist comes naturally, especially because she relates to painting from a Cultural perspective. She expresses storytelling through her paintings and reoccurring themes include whale dreaming stories. Art expresses the storytelling of her people Verna believes. Verna enjoys attending creative workshops and cultural trips to the lands which give her the opportunity to meet other artists, sharing stories about culture and painting. These opportunities allow her to learn about her culture, while passing on knowledge to her children and grandchildren.

All Paintings by Verna Lawrie